This walk is part of the trek Antrim Hills Way.

This final section of the Antrim Hills Way,
For safety reasons dogs are not allowed even if on a lead.

(1) Then turn left across a stone bridge. Climb past a series of fields to a collection of outbuildings. Here the route is signed through several gates and onto a stone track, which leads away from the farm towards open hillside.

(2) After roughly 500m, turn left onto another track. Follow this along a series of fences, slowly gaining height amid the tussock-covered hills. Along the way you’ll need to pass through several gates and junctions, each of which is clearly signed.

(3) You now arrive at a high, flat section of track that contours along the upper slopes of Glenhead. The easy terrain allows plenty of time to appreciate the views. The vista stretches from Agnew’s Hill in the East, past Belfast’s Cave Hill and the windmills on Elliot’s Hill, to the distant peaks of the Mourne Mountains in the south.

When the track starts to descend, turn right and cross a wooden stile. You are now on open mountainside, and signs indicate that you should ‘look for and follow the white posts’. These are weathered and sometimes widely spaced, so it’s worth taking your time to locate each one.

Once across the stile, turn left and follow a series of fences over several hummocks. The ground is sometimes wet underfoot, and there are several stiles and small ditches to negotiate. Though the route passes near the summit of Glenhead (393m), there are no distinguishing features to mark the top. A gradual descent along a fence then brings you to the tarmac of the Shillanavogy Road.

(4) Cross directly over the Shillanavogy Road and begin to climb again on the other side. Rather than following a fence – as you have been doing for the last couple of kilometres – the route now heads North-West across open ground. A short ascent brings you to a prominent marker post on the northeastern slopes of Douglas Top. (A)

(5) Descend North-West until you meet a track, then turn right. Follow the track downhill to a junction marked by a route information board. Now head left, continuing along another track to a prominent waymarker attached to a large, upright rock.

Turn right at the rock and climb across two stiles to reach an expanse of rough heather and grass. A series of white-topped posts leads North-West across the moor, drawing ever closer to the steep, craggy slopes of Slemish. It is something of a relief to reach the cropped grass and firm ground surrounding Slemish itself.

(6) The trail skirts around the southwestern base of the hill, running just beneath a jumble of boulders. After almost a kilometre the car park comes into sight ahead, and a final descent beside a series of wind-sculpted hawthorns brings you to the end of the route. (A)

Terrain : Please be aware that this walking route passes through areas of open land such as hillside, working farmland and working forests. Livestock and bulls can be present at certain times of the year, ground conditions may be uneven or wet underfoot and all forestry signage should be adhered to. Hills are exposed and mostly covered in heather or tussocky grasses. Good footwear and advance preparation are strongly advised.

Note : The route is in place through permission of landowners. It is mostly off-road through fields which are usually grazed by sheep or cows. For safety reasons dogs are not allowed even if on a lead. Bulls can be present at certain times of the year.

(A) Panorama Douglas Top : From here a new panorama is suddenly revealed, with the unmistakable profile of Slemish now visible to the northeast. This mountain owes its distinctive shape to the fact that it is an old volcanic plug, and was once constrained within the crater of a volcano.

History about Hill : During the Tertiary period, this region was subject to two million years of intense volcanic activity. The remains of numerous extinct volcanoes dot the Antrim plateau, including Scawt Hill and Slemish. Both these mountains are made of dolerite, formed from hardened magma. Nearby formations such as the Giant’s Causeway also bear testament to the amount of lava that flowed.

For this 2nd section of the Antrim Hills Way, enjoy views of cliffs of Agnew’s Hill and long views open out along the Glenwherry Valley, with the windfarm at the top of Elliot’s Hill before going past Donaghy's Bridge and reach Greenmount Hill Farm & Agricultural College. For safety reasons dogs are not allowed even if on a lead.

Featuring expansive panoramas and challenging climbs, this walk traverses cliffs, moorland and country tracks before leading to Slemish Mountain. Crossing some of the most scenic upland areas in the Antrim Glens, this walk provides uninterrupted views over many miles of Northern Ireland. Mountain walkers will love the challenge of the steep climbs to an exposed landscape, negotiating ground cover of heather, tussocky grasses and reeds and jumping over streams and damp bogs.

For this 1rst section of the Antrim Hills Way, enjoy fine views open out to Slemish as you reach Black Hill and some coastal views improve as you progress afterward, with the hills of Scotland and the rocky outcrops of the Maidens, or Hulin Rocks, all clearly visible out to sea 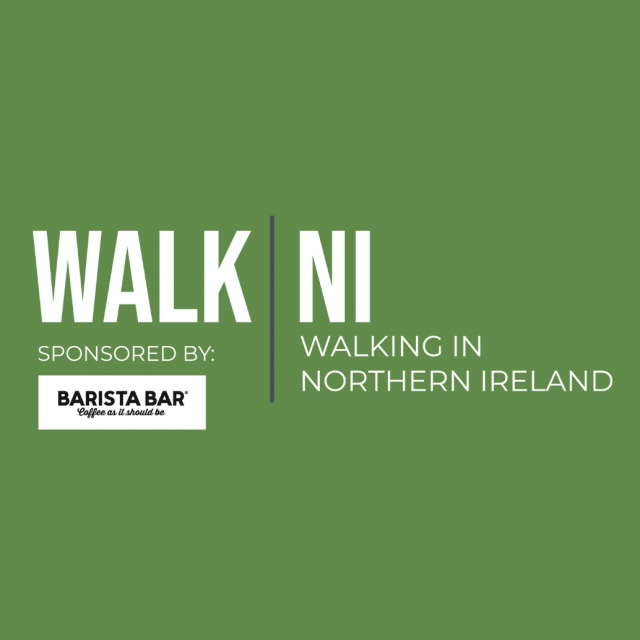 Your definitive guide to coastal, parkland, urban, riverside, and forest trails in Northern Ireland. Contact us at info@walkni.com